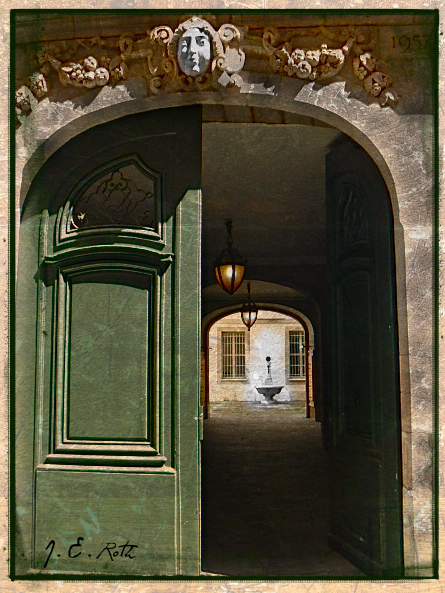 Gaslights flickered, revealing the raindrop-slicked, uneven cobblestones of the darkening Geneva street. Quickening her pace, an uneasy sense of foreboding seeped over her, like a drop of red wine on a white cloth; wetting, inexorably spreading, slowly penetrating the pristine fabric.

The solitary sound of her clicking heels in the cavernous alleyway only served to heighten her overactive imagination. She wistfully recalled her afternoon excursion to the countryside outside of Bern, where lambs grazed peacefully on rolling hills of green, as if fulfilling their destiny. It was the epitome of a purposeful life, the balance of ‘Nature’; incomprehensibly complex and yet beautifully serene.

As if on a treadmill, she paced her strides and her breath to “The Messiah” chorus running through her head, and ascended the steps leading to the steep, ‘Cathedral’ hill:

The rhythmic, incessant, subconscious breath control technique, not only got her through her workouts at the gym, but also helped her focus, physically and mentally, on something other than the task at hand.

Eerily, her  music was  interrupted, replaced by haunting, melodic strains that permeated her psyche. It was a simple motif, played on an oboe; a tune with which she was intimately familiar, though she could not recall having heard it before. She only knew, intuitively, that it was written for her and now it was calling to her.

There it was again!

She stopped and turned abruptly. The weathered, ancient portal creaked ajar, as strains of the oboe sonata grew louder and more compelling. As if hypnotized, inextricably drawn closer to the source of the music, she crossed the threshold leading to the interior courtyard.  She rationalized that, surely,  it was a struggling musician, studiously practicing in a nearly atelier.

The sun had set long ago, and the moonless sky was ebony black; and yet here in this hidden space, she was bathed in spectral light and surreal song.  Allowing the light and the music to wash over her, all  attempts at rational thought ceased; replaced by calm acceptance of that which she didn’t yet  understand.

It was with  a sigh of exasperation tinged with relief, that he hastily swiped to answer her call when he saw her face pop up :

“I’ve been worried sick – where are you?
Hello?
Hello?
Jeanne, are you there?

As if alive, the phone leapt from his hand and clattered to the floor. He peered down in shock, as Jeanne smiled a frozen smiled back at him from behind the shattered screen, while the tinny speaker blared the unmistakable strains of a plaintive oboe.